My — our — longtime friend, Cuyler Warnell "Ned" Brooks, Jr., was repairing his roof today, fell off, and has died.

Ned was a good friend for the twenty years we lived in Newport News, and we stayed somewhat in touch. We didn't know anybody in town, and Ned helped ease the transition into local fandom for us.

He was well-known in fandom, perhaps a legend, for his book collection (he eventually bought the house next door to hold more books, before moving to be with his family later on), his museum of antique and oddball typewriters and reproducing machines, which he kept in enviable repair himself, or the art he bought over the years. If I'd had a digital camera the last time I went to his house, I certainly would have photographed his Don Martin from a 1950s SF magazine. Exquisitely Martin.

When Cathy threw a convention (Ditto) in Virginia Beach, we conspired to "randomly" award the Guest of Honor spot to Ned, who wouldn't have allowed himself to be so honored without an ambush. Called to the podium, he gave this speech, which my brain has paraphrased thusly:

A fellow, back in the day, in France, was prevailed upon by his friends to take a ride in a sedan chair. Oh, they said, it's incomparable! You'll love it! So they engaged a chair for him, but played a little joke. There was no bottom. He stepped inside and was still on the ground. When the two lackeys picked up the posts and started going, he had to step lively to keep up.

Afterwards, his friends asked how he had enjoyed his 'ride.' "Well," he said, "Apart from the honor of the thing, it's very much like walking."


He gave me a book from his collection once and said all he'd take for it would be a cover for his fanzine, It Goes on the Shelf. It took me a couple of years to get to the cover, and when I sent it, he didn't recall ever asking me for it, but put it on the back of the issue to be agreeable anyway.

More recently, inspiration hit me, and I drew another unsolicited cover for It Goes…, and this time Ned was happy to have it. It was to be the cover for this year's issue (I gave it to him last year, at which time he already had a cover lined up). 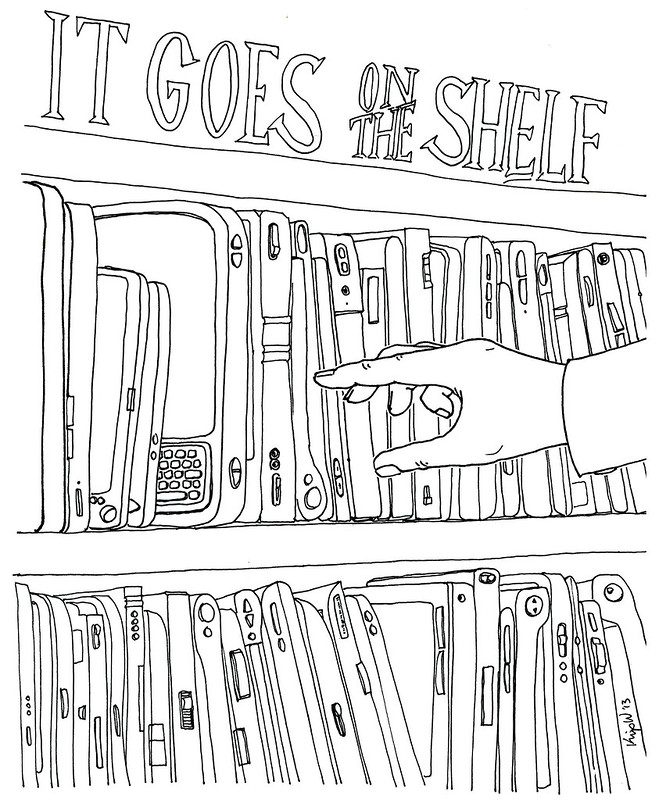 His family is taking care of his estate now. I have a vague desire for a bookplate for that book, so I can remember where it came from. But I will anyway.
.