I've had fifteen minutes of fame. In fact, more. I reckon I had some fame when I was in community theatre, and someone recognized me at a gas station, as having been in that play, so that's a couple of minutes right there. I got a bit of additional fame when Gordon Garb took out a dignified ad in the Westercon program book in 1985, stating that "West Coast fandom welcomes Kip Williams, President and Founder of the New Pals Club, and President of the Kip Williams Clean Plate Club." 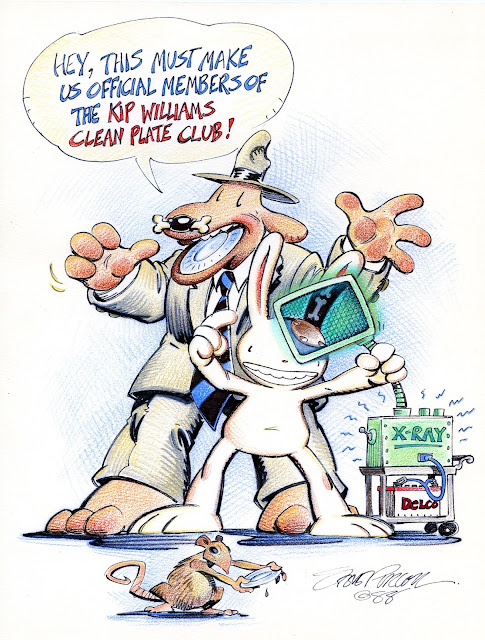 [image: Steve Purcell color drawing of Sam & Max, with plates. Martin "Bucky Starr" Cameron was feeling like he should do something about a thing, so he bought Purcell some pizza and directed him to create this gorgeous Prismacolor opus in my honor.]

I got some more fame when Dave Sim, Pal #6 of the New Pals Club, saw me for the second time, the first having been when we'd lived in Houston (where I signed him up for New Pals with a hearty "Hi! Let's be Pals!"). This time it was in Virginia, and I was able to give him another mailing in person, and because of that, he used a pair of photos from the event on the back of an issue of Cerebus, which I keep thinking was somewhere near #111. He thoughtfully ID'd me in a caption: "Say, isn't that the famous Kip Williams, founder of the famous New Pals Club?" or something very similar.

Another jolt of fame came via by good friend Harry McCracken, some time in the 90s, when my visage was included to help pad an article on eBay users who collect stuff. I held up a laser disk of NIGHT OF THE HUNTER and moved microscopically this way and that at the behest of the professional photographer Harry engaged, long-distance, to get the pic for PC WORLD, where Harry worked. There's a somewhat famous issue of NEWSWEEK from this time where an American athlete did a victory move in her sports bra. Brandi Chastain, as I have verified, looking good. Anyway, they wanted an advertising supplement for it, and used the PC WORLD article, trimmed down a bit--but still including the memorable pic of me holding the disk, utterly oblivious to the perfect reflection the photographer got me to pose with.

So that's some more fame, there. There was one other time when Harry, by then at TIME, used me for an article he'd written on people quitting Facebook. It was around 2015, and the story was typeset on pages with ads and all, then something big happened in the world that required that exact amount of space, as things will do, and now all that remains is some PDF images of those set and unpublished pages, real in some ways, and in others amounting to little more than a MAD parody of the thing.

I'm not counting every time I've been on a stage as fame, though maybe I should at least count those very gratifying times when circumstances made me into a figure that audiences looked at for their entertainment, and received value for their choice. If I think of any more times I was getting famed, I'll add it in here, but I think I'm up over forty minutes by now.

I wrote, in New Pals, about my first fifteen minutes of fame. The first five were incredible! A thrill ride! The five after that were still okay, though it was starting to be stressful, and I learned too much about a very good friend. I really clung to the last five, but they ticked inexorably away. A minute before it was all over, I found Jesus, who offered me some very sage advice which I don't have time for at the moment. I'd allowed fifteen minutes to write this, and it's about gone.

I once thought it would be grand to have a curtained glass window with a money slot next to it. You put in $5 or whatever, and the curtain would part, and Andy Warhol would be there, just standing. He might glance at you. After fifteen seconds, the curtains would close again. Andy's gone now, but someone could impersonate him, or it could be someone else who has had or is having their fifteen minutes. Manning the booth for a shift would be part of the price you pay for that fame.

Redrafted slightly, and could well be redrafted again, from a promising fruit of the 'fifteen minutes each day' writing exercise with sis Kathryn Morski during a wonderful visit.