.
It's been quite a semester. I took a sociology class and did okay, and at the same time, I took a figure drawing class (okay, not simultaneously, like rubbing your stomach and patting your head), and I exceeded my expectations. I've had drawing classes before, and the teachers would tell me to draw something, and then give me a grade on it. This semester, I got a teacher who actually taught me how to draw stuff — in this case, people with their clothes off.

From the supplies to how to hold your pencil to measure and compare the subject to what goes on the paper, she gave us detailed instruction and then went from student to student giving critiques and demonstrations. It was an education. Here's the next-to-last drawing I completed in class: 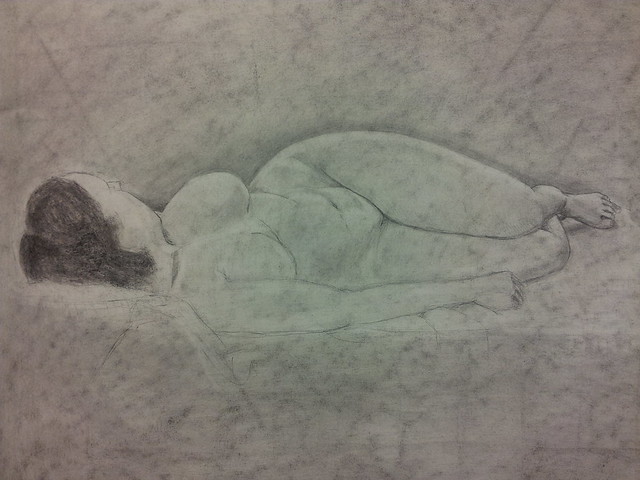 When I had it to that stage, I was looking at it and thinking this is the best life drawing I've ever done! That's not the finished drawing, though. My teacher, Maureen, spoke to me about it in her forthright way, which can be abrasive, and told me what was wrong with it and how to proceed. I went back to the board for two more classes, and came away with this: 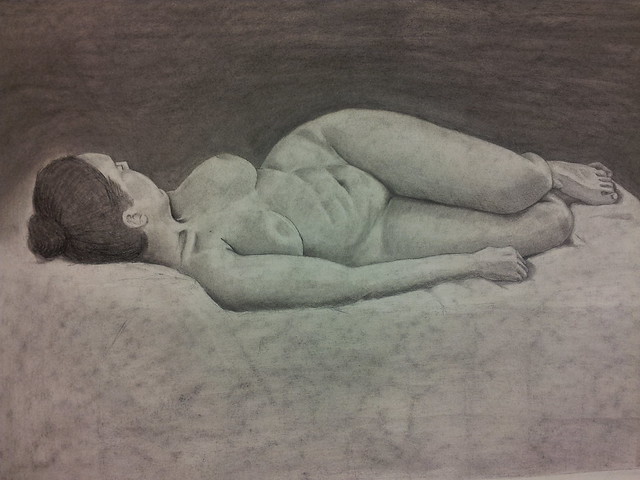 Get into the shading. Get some real contrast in it. Look at the overall lights and darks. Vary the outlines so they're not all the same kind of line. Keep measuring and comparing. Find the little things that tell the viewer what's in front, what's behind, and where things change. I did all these things and was amazed at the results. There was one more drawing to do: 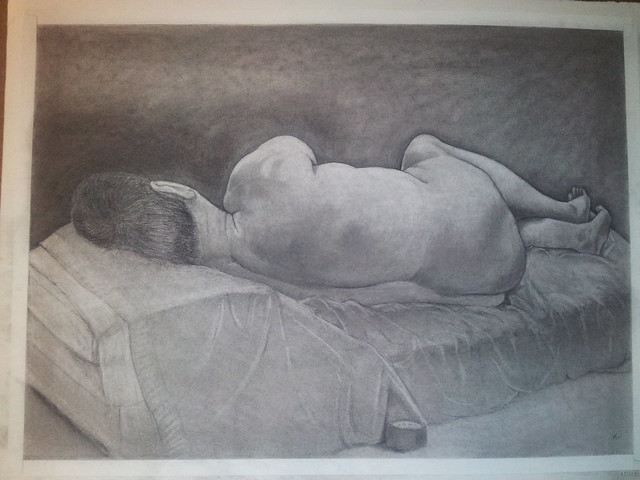 This one benefitted from all I'd learned already, as well as the guiding presence of Maureen and a relatively quick start that left me lots of time to refine. I got to spend at least an hour just on those wrinkles. It was a great finish to my most educational semester.

Also, we got to talking in class. Maureen said something about nuts coming from Wisconsin, and I mentioned Ed Gein, which prompted her to recount how Gein had had a parole hearing while she was still living there, and she'd been appointed the courtroom sketch artist. At the end of the hearing (which Gein, of course, failed at, and went back to confinement), the famous skin-wearing maniac thanked her for the job she'd done and shook her hand.

So of course I asked her if I could shake her hand, and she said sure. The same hand that Buzz Aldrin shook, and half of the hand team that applauded Dave Brubeck and Hal Holbrook. It was quite a semester.
.
Posted by Kip W at 12/30/2015 08:57:00 PM No comments: